“Why Is This Night Different From All Other Nights?” Book Review

“Why Is This Night Different From All Other Nights?”

Publisher: Put Me In The Story

Regular readers of this blog and my Goodreads account know that I am an enormous Snicket fan. I love the word play and the ambiguities and the sadness and the grey moral pit which is humanity and the quiet humanism which underpins both A Series of Unfortunate Events and Snicket’s newer series, All The Wrong Questions. Regular readers also know that in some ways I love this newer series more: the writing is sharper and packs more punches, the characterizations are all spot on and the film noir spoof suits VFD’s early days perfectly. So it was a delightful surprise when I received an email from American publisher, Put Me In The Story, requesting a review of the customized reprint of the series. Children have always loved placement in stories, especially detective style ones where adults are wrong and children fix things (and adults who are young at heart love these too) and I could see immediately that the Snicket world of VFD, book readers beating out followers of violence and a story filled with codes and secret handshakes would suit a customized medium perfectly. Snicket had practically gone there with An Unauthorized Autobiography anyway. I leaped at the chance. 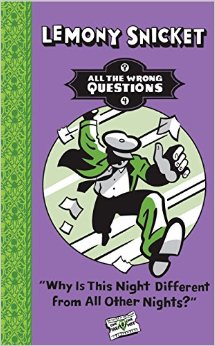 In this final story, Lemony Snicket must board a train returning to the city to finally uncover Hangfire’s diabolical plot and help his friends try to save Stain’d By The Sea one last time. At first I was afraid the story was a spoof of Agatha Christie’s Murder on the Orient Express. It wasn’t at all. Strange and bitter and sad, instead the story reveals the source of the VFD schism, the corruption already alive in VFD long before Olaf came along, and the beginnings of Snicket’s lonely journey to being both a part of, and seperate, to his secret society. The ending definitely leaves room for a follow-up series exploring Snicket’s romance with Beatrice and subsequent parting as the schism saw them labelled to different sides.

I have always loved Snicket’s ambiguity about people and their actions. The third story in this series saw Snicket make a rousing speech about literacy and decency and passive fights and him and his friends seem to be all on the same side. By this novel’s end, we feel sorry for the hapless and confused Theodora S Markson, the fatherless Ellington Feint and the wild and disillusioned Hangfire. The mysterious villain is revealed to be deranged, but not without cause, and it is a mark of how brave this series has been that Snicket is forced to do wrong to save the town and his friends and concede to some of Hangfire’s perspective. It is clever, if deeply tragic, that Snicket loses his friends to save the town.

Ellington Feint and her terrible coffee have always been an interesting component of the series and the story picks up the second she spars with Snicket: ambiguous, lost, alluring and childish. Snicket’s love for her is a precursor to how he loves Beatrice; with all of his heart and soul and damn the consequences. Her imprisonment with Kit leaves open many possibilities. All of them interesting.

I recently attended a Writers Party where someone said Lemony Snicket was a children’s author. Maybe that’s how he is marketed. That’s definitely not how his series can be read. Yes, the early Series of Unfortunate Events books are juvenile. But later books, and this most recent series, teach adults as well as children and make us question our values about good and bad, right and wrong. For there is still a kernel of hope if you see beyond the terrible waste and sadness of the ending to this series, just as there always was in A Series of Unfortunate Events. Tor books had a great review exploring this element here

“We are an aristocracy,” Snicket tells Moxie in “Shouldn’t You Be In School?” “Not an aristocracy of power, based on rank or wealth, but an aristocracy of the sensitive, the considerate, and the plucky. Our members are found in all nations and classes, and all through the ages, and there is a secret understanding between us when we meet.” He goes on to say, “Our schisms and arguments might cause us to disappear. It won’t matter. People like us always slip through the net. Our true home is the imagination, and our kingdom is the wide-open world.” It is a beautifully telling quote amongst a series of beautifully telling quotes. Yes, people are good and bad like a chef’s salad, including Snicket himself, but if we can try to be good and kind and decent and well-read, perhaps we can leave the world a little better than when we began in it. It’s the perfect story to share through customization because it’s the moral all of us want for our children.

All four books were presented  as an associate’s training guide, and include:

·         Photo of the reader included on a character portrait page

Only the most recent book was printed in hardcover. The rest are paperback.

My brother loved this Christmas gift. He loved the messages addressed to him and the photo on the opening page of each book and the references to places and people he knew, as though he himself had joined VFD. And he’s twenty-three. So what are you waiting for? Interested in children’s books with meat? Go forth and purchase!

“Why Is This Night Different From All Other Nights?”: 4/5 inky stars

All four books in this series were supplied by the publisher in exchange for an honest review.