‘Attend the tale of Sweeney Todd,

His skin was pale, and his eye was odd.

He shaved the faces of gentlemen

who never thereafter were heard of again…’

So begin’s one of Broadway’s most chilling musical pieces…

I first saw Burton’s movie in 2008 when it was in cinema’s in Australia. I’d never heard of the original horror story before, and generally I hate horror, but my love for Helena Bonham Carter won out, and got me to the cinema. I ended up seeing the film three times in cinemas because I loved it so much. For me, the power of the movie was the jarring combination of Sondheim’s soaring and beautifully complex score and lyrics combined with the sheer brutality of the story being told. Lovely art direction and acting definitely helped.

My friend lent me a copy of the original penny dreadful, with the popular culture legend based off the weekly periodical, and even though penny dreadful’s are renowned for catering to the lowest common denominator, meandering all over the place, due to their status as a newspaper weekly periodical written by multiple writers, or by writers writing multiple tales at once, I was keen to read this one, if only to find out how much the tale has evolved.

Rather alot it turns out. The original penny dreadful is surprisingly readable, and for the most part, keeps its story straight. Mrs Lovett has about four chapters dedicated to her out of thirty seven and the story starts off with her already in cahoots with Sweeney. Sweeney Todd is a right evil villain, without a backstory for it beyond greed, cunning, and a desire to make it big, quick. Johanna and her lover, Mark Ingistrie (later becoming Antony) are lovers before the story begins, with Mark going to sea to make his fortune in order to marry Johanna. Mark brings back a string of pearls with disatrous results. Sweeney kills the messenger, literally, runs off with the pearls, and kills his clients with wild abandon in an effort to shut up shop and retire fast. His clients get disposed of via the chair which links via passageway to Mrs Lovett’s pie shop. And yes, she does bake those bodies into pies. Tobias is Sweeney’s latest shop assistant and upon finding out about Sweeney’s evil secret is incarcerated in an asylum. Mark Ingestrie is hidden in the narrative right up until the rather obvious end, when he and the plucky Johanna live happily ever after. St Dunstan’s market and church make an appearance, and so does The Beadle briefly, though as a good guy. There is no judge at all.

The penny dreadful was entitled “The String of Pearls: A Romance” and was set much earlier than later play adaptations, much more about the daring do’s of Johanna and Tobias, fighting to survive amongst the cut throats, criminals and madmen of London’s dark underbelly. And of course, centre stage is the romance of Mark and Johanna. Sweeney and Mrs Lovett are are black as you can get, and you don’t spend a second sympathising with either of them.

In subsequent play productions of the penny dreadful, such was the popularity of Sweeney and Mrs Lovett, it was they who started to claim the show more and more, though still with Sweeney as villainous mastermind, in a kind of centre stage one man show. It was not until Christopher Bond reinterpreted the original story in 1970 to give Sweeney a sympathetic backstory based on revenge, with Mrs Lovett as a still willing, yet this time, deeply in love accomplice, that the story as it is famously known today surfaced.

No longer was Sweeney simply a common criminal; now he was a man wrongly accused, sent overseas and torn apart from his family, because the hand of the law was long and corrupt and lustful. His existential crisis leads him to seek revenge for these wrongs, with the judge and his faithful Beadle, the targets of Sweeney’s murders. Mrs Lovett is no longer simply a conniving and cold hearted money maker, she is now a lady lost in a love she can never have. The simple Tobias Ragg just wants somebody to respect him, Johanna falls in love with the sailor boy Antony, even as she is kept in captivity by the lustful judge, who intends to marry her, as Sweeney’s daughter. And the judge is in some ways more of a villain then Sweeney. 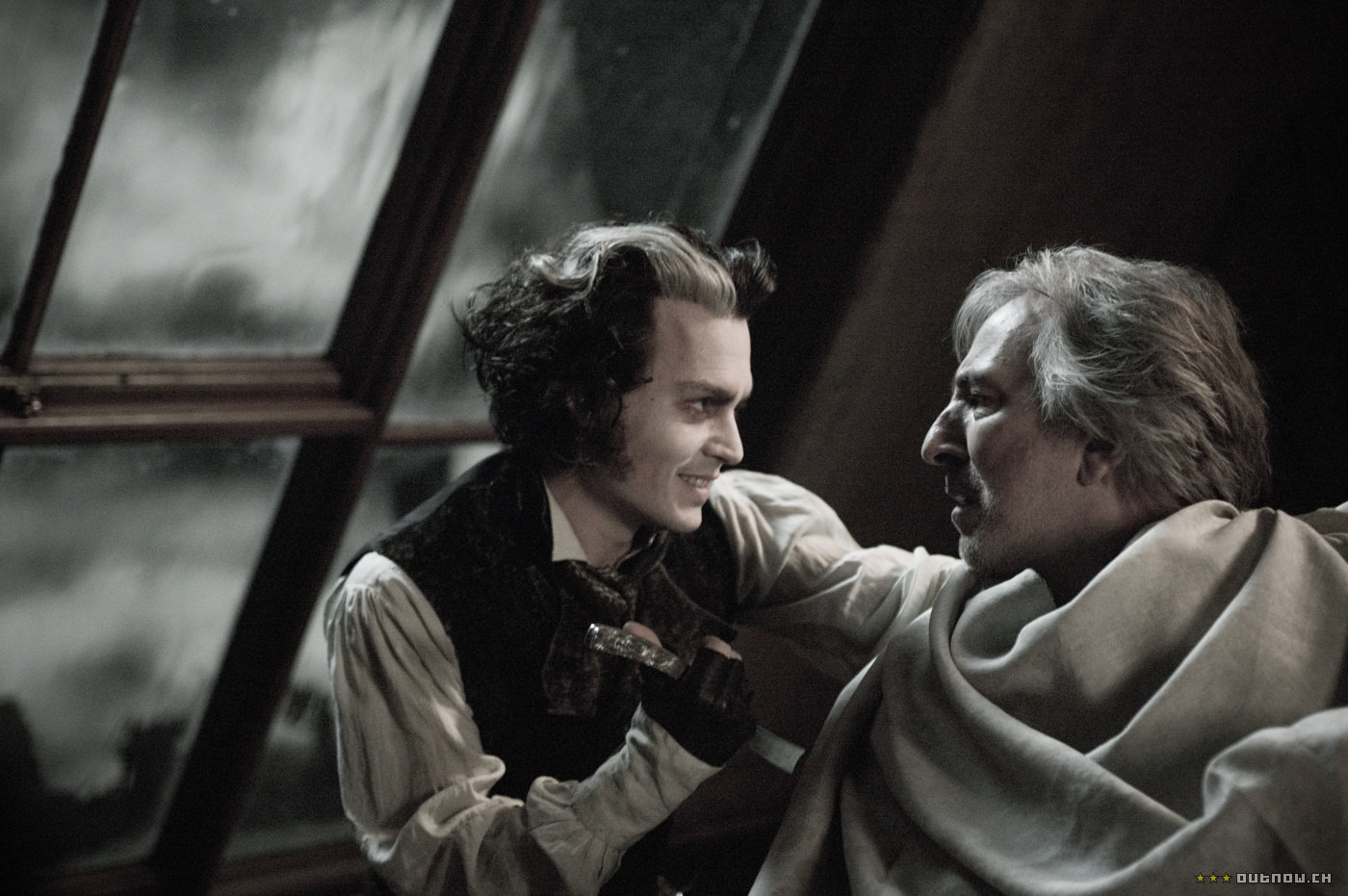 Sondheim saw a stage production of Bond’s play and wrote his own musical based off this version, better known today as the justifiably famous 1979 Broadway play, Sweeney Todd: The Demon Barber of Fleet Street. 80% sung opretta, the original production starred Angela Lansbury as Mrs Lovett and Len Cariou as Sweeney Todd. Who could forget the powerful  and reoccuring narrational The Ballad of Sweeney Todd, or the heartfelt raw nihilism of Epiphany, the delightful and disturbing humour of A Little Priest, the sweet innocence of Kiss Me, the chilling beauty, power and devestation of Final Scene? Regarded by Sondheim as a musical about obsessional revenge, and by director Harold Prince as a comment on capitalism, class, and power imbalance in soicety, it won alot of awards, but has never achieved the same popularity as musicals such as Lloyd Webber’s Phantom of the Opera.

Burton’s film adapted for a new audience yet again. This time, and due to the nature of a film medium, the external narration was cut, Johanna and Antony take a back seat for Sweeney Todd and Mrs Lovett to shine, and Toby is a child, rather than a ‘simple’ man. Mrs Lovett is younger, and her maternal insincts are played up, eyes glistening with longing every time Sweeney looks her way, the camera lingering on her every glance, and movement, as she tries to seduce him so that they can live her dream life, ‘By The Sea.’ In the film version, every fibre of Mrs Lovett’s being is geared towards achieving her impossible dream of domesticity with Sweeney, Toby just wants a family, and Sweeney is so consumed with rage and despair he cares for nothing beyond the judge’s demise. It is, in my opinion, a movie masterpiece.

Burton cast actors who could sing, rather than singers who could act, minimising the theatrical nature of the play medium in favour of strong, visceral, performances. 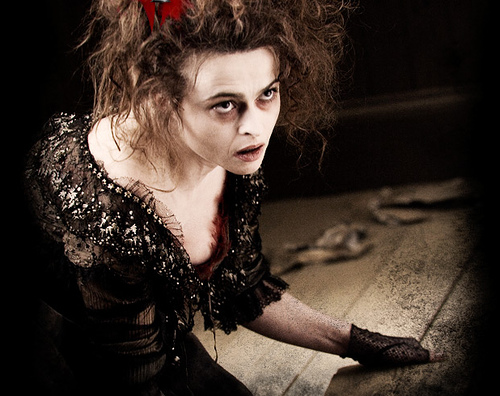 Johnny Depp’s Sweeney sings in emotion laden rock style, and Helena’s Mrs Lovett is timerous, and soft, oozing both sexuality and soft maternal love. The genius choice to cast Toby as a boy led to one of the film’s finest moments, as Toby sings Not While I’m Around to a devestated Mrs Lovett.

A review by famous Rolling Stones film critic, Peter Travers sums it up best for me: “Sweeney Todd is a thriller-diller from start to finish: scary, monstrously funny and melodically thrilling…Covered in blood, Sweeney is finally engulfed by his emotions, and Depp finds the character’s grieving heart. It’s a staggering moment in a spellbinder of breathtaking beauty and terror.”
Read more: http://www.rollingstone.com/movies/reviews/sweeney-todd-20071213#ixzz1tln2hXON

Though the original penny dreadful spawned one of the west’s most popular tales of urban horror, it is Sondheim’s ingenious musical, straddling both gut churning thriller and melodic beauty, that speaks most to me. Emotional, terrifying, and visceral, it is one of my favourite musicals, and Burton’s film adaptation remains one of the best film’s I have ever seen.

So without futher ado, I urge you to…

Attend the tale of Sweeney Todd.

He served a dark and hungry god.

To seek revenge may lead to hell,

but everyone does it, and seldom as well

The Demon Barber of Fleet Street.

2 thoughts on “Genre Spotlight- The changing face of ‘Sweeney Todd: The Demon Barber of Fleet Street’”