Sometime last year, a blog friend of mine, Jo, told me all about Conflux and all of the reasons why I should attend. I contemplated it for a bit and then forgot about it. Richard Harland reminded me about it at the Speculative Fiction Festival and I took another look at the program. It was such a good program that I immdiately signed up to my first ever convention. Conflux was also the Nat Con this year which meant that I was also able to attend the Ditmar Awards. Score!

I threw myself headlong into the convention, attending a number of writing panels, fandom panels and book launches. 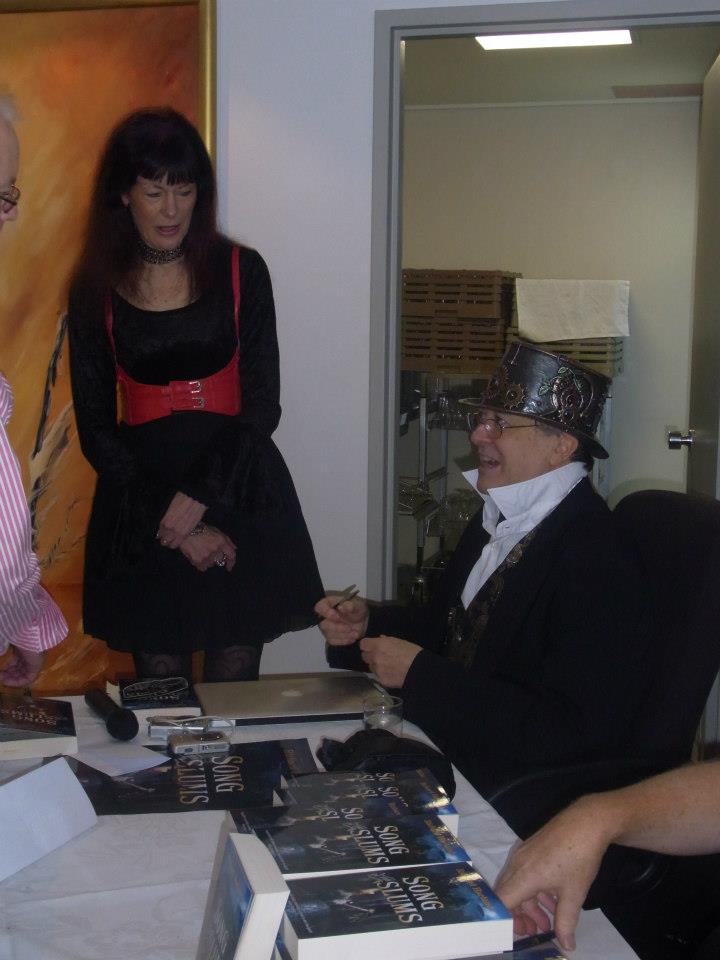 Richard signs his life away upon launching Song of the Slums

I also attended the enormously fun Steampunk High Tea and Regency Banquet (anything for an excuse to dress up). 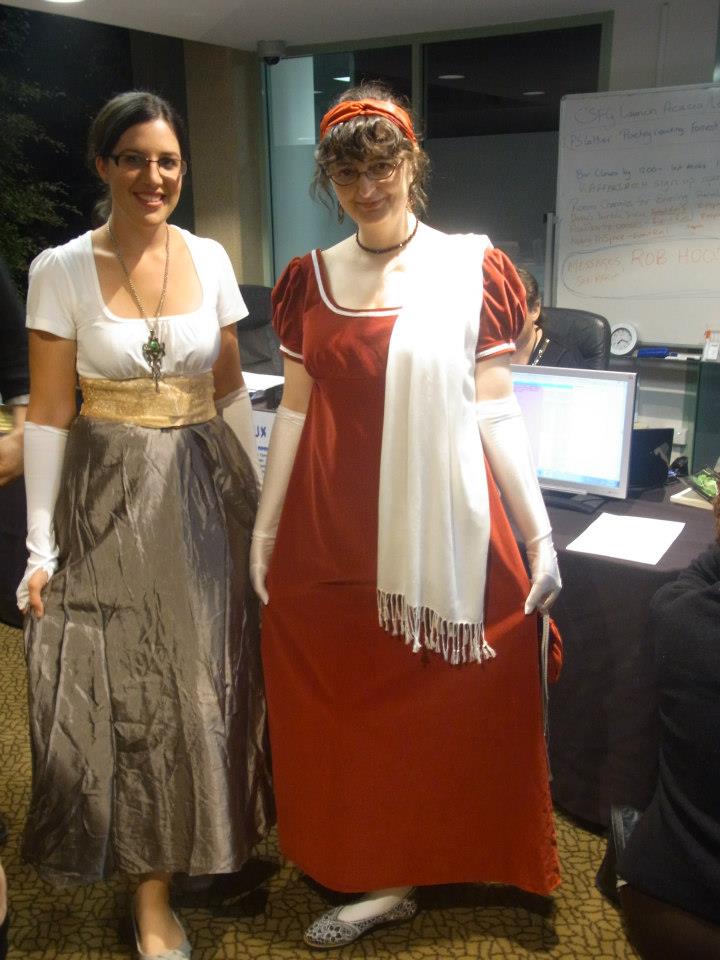 Trudi Canavan and I go Regency 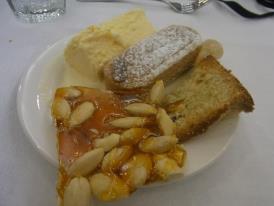 The final night’s junkyard disco with DJ Sean Williams was a big highlight for me, with 80s rock fun had by all. Of course, one of the best things about attending a con like this was knowing that everyone around me was also a writer, editor, reader or publisher interested in speculative fiction. I met some really lovely people including Sean Williams and Lisa Hannett in the flesh rather than the internet ether, the wonderfully creative Trudi, the infamous (and multi-talented) Cat Sparks, the gloriously gothic Aileen Harland, Justine and Scott, Kirstyn and Jason, the lovely Angie and Ellen, creator of many a feast, Gillian Polack, and of course, my wonderful blog buddy, Jo. And these guys are just the tip of the iceburg. I couldn’t possibly name all of the wonderful people I met and chatted with because I’d be here all day.

Panel highlights included a very lively panel on The Politics of Steampunk where a member of the audience started a debate in proposing that steampunk is inherently racist. Some panelists saw steampunk as inherently fitting into a set of tropes that made it easier to be racist whilst others argued that story is king and that it was about telling a good story, not about making political points. Steampunk settings are ones of great change and political upheaval, they are set on the cusp of modernity and that provides a lot of scope for a writer. The Buisness of Writing made me think about having a long term writing plan and authors reminded me that you should never ever argue with the internet’s negative opinion of your work. The internet will always win. I also got a lot out of a panel on Writing Communities which emphasised the importance of writers groups, taught me about the useful Milton Critique method and gave me a rule for submissions- you will be rejected. Lots. That’s OK. One day someone somewhere will cave in. A panel on Mentorships was illuminating and conversations afterwards with panellists really clarified some sticking points for me to do with funding bodies and opportunities for emerging writers. On the less buisness side of things, I enjoyed a panel on Geeks Are Cool where a panellist turned up in a Totoro outfit a good ten minutes late and a fairly amicable Doctor Who panel on the potential for a female doctor (Tilda Swinton anyone? Or maybe Dawn French or Sophie Okenodo?) A panel that compared speculative fiction to crime tropes provided much food for thought. 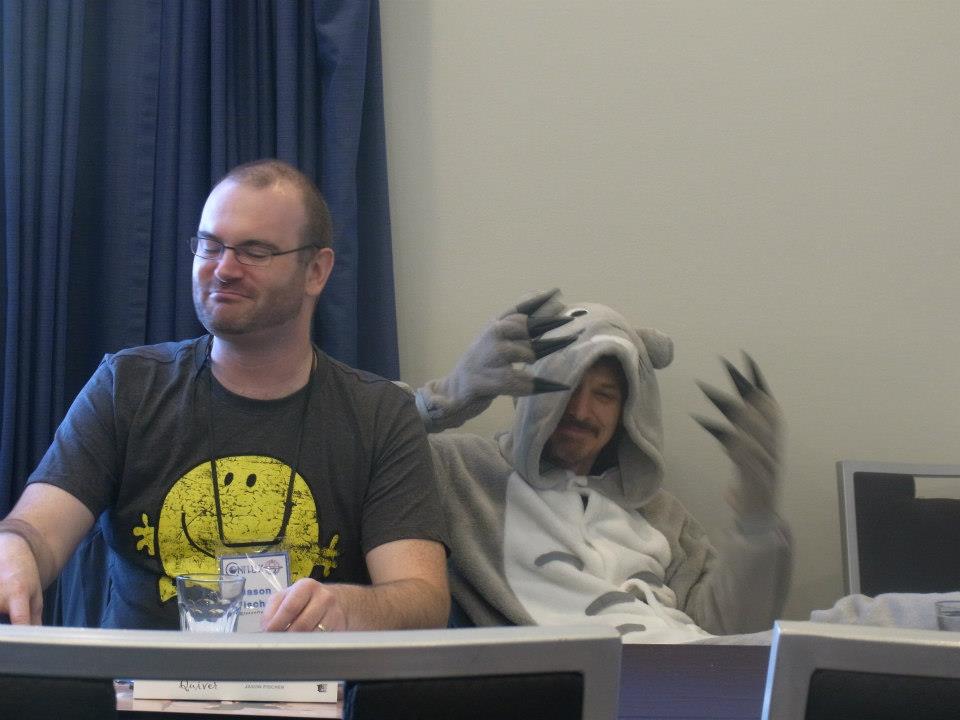 When I wasn’t at panels, I was trying my hand at attending Kaffeeklatsch’s, a cocktail party, chatting in the bar or listening to romance writers read out their steamiest scenes for point scores. Trudi and I tried our hand at Regency dancing and I ‘won’ a tweeting prize at the Ditmar’s which I promptly forgot to collect (Whoops!). Margo Lanagan took out the big award for Sea Hearts and Russell Farr recieved The Chandler Award for his work with Ticerondoga Press. A most excellent twitter commentary of the awards can be found Here and was put together by Seanblogonaut. I especially enjoyed the comments about the size of Margo’s award cabinet. I also loved the novelty bubbles given out before the Ditmar’s, the raffle tickets, the lego and of course the cockblock clock. Every award ceremony should have one, Deb!

I ended up coming home with seven books including Midnight and Moonshine by Lisa Hannett and Angela Slatter, The Bride Price by Cat Sparks and Richard Harland’s new novel, Song of the Slums. I also came home several friends richer. What an experience!

0 thoughts on “Conflux9: Some notes”