Book Review: The Word is Murder by Anthony Horowitz

Anthony Horowitz is one of those authors who has been on my radar for a long, long time. I’ve never read his popular Alex Rider series, but they’ve been on my to-read pile for years. Midsummer Murders was a family staple when I was in high school, and Foyle’s War is one of the best crime and historical dramas ever written for the television in my opinion (why oh why ITV did you cancel it? Please tell me there will be more, Horowitz. Please). I’m also interested in Horowitz’s sanctioned Holmes stories, House of Silk and Moriarty. Even if I’m not a fan of Holmes stories, I do enjoy some good Moriarty fan fic. As part of his transition to adult fiction, Horowitz’ most recent two stories are meta crime. I haven’t read Magpie Murders (yes, it’s on my list too), but when I read the super interesting interview I re-blogged from Sophie Masson about The Word is Murder with Mr Horowitz and saw that there was an e-book sale happening, I jumped right in with Horowitz’ most recent. And what an odd beast it is too…

Where Magpie Murders sees Horowitz experiment with the book within a book trope (an author is killed and his editor reads his manuscript to source clues), The Word is Murder goes much further. In a Holmes/Watson dynamic, the fictional detective Hawthorne teams up with author, Anthony Horowitz, to uncover who killed Diana Cowper just after she arranged her own funeral. Diana’s son is famous and much of the story follows various people involved in acting and the fame game. 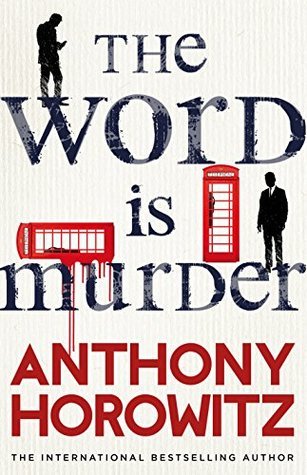 I enjoyed this unusual crime read, though I suspect writers and avid crime trope and genre fans (such as myself) are more likely to enjoy the novel’s central gimmick. Horowitz posits that he writes the novel at fictional private (sometimes police) consultant, Hawthorne’s request and the novel is written in the first person from Horowitz’ perspective. There is a lot of time dedicated to Horowitz’ own experiences writing crime drama for TV and plotting books, which I found fascinating as a crime writer. Judging by Goodreads reviews, other readers mileage may vary. I did find that sometimes Horowitz became too obtrusive in the story, too self-aware and this detracted from the very well-written, very clever mystery around Diana Cowper. Inventing fictional characters who had CVs rooted in the real world was also a bit distracting for me as I’d seen most of the dramas mentioned and knew no such actor had been in them!

As I mentioned earlier, I’ve never read a Horowitz novel before so had no idea what to expect in terms of writing quality (I knew he could plot a crime story from various dramas). There is no denying that Horowitz is a brilliant writer. I found myself reading passages of dialogue and trying not to weep in despair at how trite my own conversation passages in my manuscript read compared to his. He has a way of sketching strong characters quickly through conversation which brings his story to life.

The overall crime plot was clever, even if I guessed a portion of it. Towards the end there were a number of twists I didn’t see coming and I had no clue who the murderer was till the big reveal. Aside from the more obtrusive Horowitz biography moments, this is a taut, suspenseful work.

The Word is Murder: 3/5 inky stars

You can purchase this book from Book Depository.

4 thoughts on “Book Review: The Word is Murder by Anthony Horowitz”