“Why Is This Night Different From All Other Nights?” Book Review

“Why Is This Night Different From All Other Nights?” Lemony Snicket Publisher: Put Me In The Story First Published: 2015 RRP: $16 US Regular readers of this blog and my Goodreads account know that I am an enormous Snicket fan. I love the word play…

Doctor Who Review: The Husbands of River Song

When I first met River in Silence in the Library, (a two-parter which gets better and better with age) little did I know how much I’d come to love the character. I wasn’t sure about a second swan song for River after The Name of The Doctor (which I loved as a character endpoint as well as an episode), but I was cautiously optimistic that the Christmas special would at least give us the joy of the Kingston/Capaldi pairing as well as some bad ass River set pieces. Not only did this episode deliver both in spades, Moffat really did go the whole hog for Christmas and give us an episode which is conceivable to imagine as part of a River Song spin-off with a Doctor guest appearance. The Husbands of River Song managed to be laugh out loud hilarious, beautiful, bittersweet and fluffy all at once and I loved every second, even as I acknowledged it’s a flawed beast. 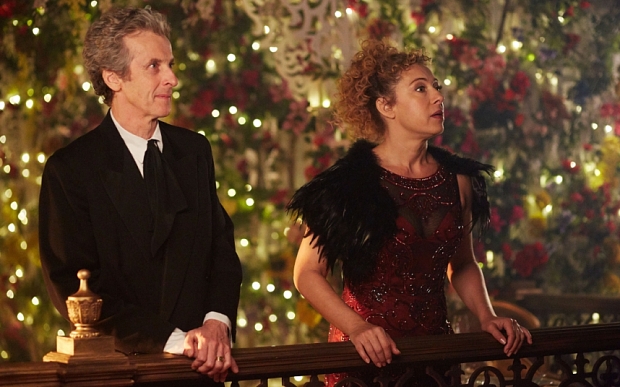 The Plague of the Christmas Special

Most people I know acknowledge that the Doctor Who Christmas special is never particularly great. They are weak points of even strong series of New Who. I came to positively loathe them in RTD era Who, and Moffat has been hit and miss with episodes like The Christmas Carol and Last Christmas great, and The Doctor, The Widow and the Wardrobe abysmal. I always go in with minimal expectations so I can be pleasantly surprised when a special goes against type.

This year’s episode got the obligatory Christmas trappings out of the way early with carol singers playing against the backdrop of an alien planet and The Doctor appearing before Matt Lucas in antlers. One bonus of Capaldi’s grouchier Doctor is that he can at least lampoon the contrived Christmas moments. The plot too starts off ridiculous, much lighter than most of Series 9, with River contracting The Doctor (though she doesn’t recognize him as The Doctor) to extract a diamond from King Hydroflax, a war loving maniac. The diamond in the brain plot was very The World is Not Enough and is completely ridiculous. However, at least in this episode it served a purpose by showing the audience what River does in her time away from The Doctor. Though much of this episode is Christmas special silly, it felt earnt in this particular story because of what we see of River and her relationship with The Doctor.

River has always been a pretty damn bad ass character, but this special she gets to be extra bad-ass, marrying the diamond, not the alien to return a prize of archaeological value to the people, showing the audience she has access to a ship home to only people who have committed genocide and having plans layered within plans to a Doctor level degree (no wonder they married). It’s almost a shame in a way that the character name was in the episode title because it ruined her suspense in having River cloaked up towards the start of the episode. The following line, however, let me know I was going to be in for a good time:

River: If either of you use my name again, I’ll remove your organs in alphabetical order.

I have to admit, the first time I watched the episode, I thought Moffat and Kingston had finally fucked up the character when she positively cooed to Hydroflax with sickeningly sweet platitudes, including ‘I fly to you’ and ‘Prepare, master of my life.’ I should have known River would never become that kind of character, but Kudos to the team for making me think it had happened for a good five minutes or so.

Though it was stupid of River to tell her plan to The Doctor within earshot of Hydroflax, it was worth it for her chance to use her own sonic trowel (in an oddly ironic reversal of Eleven getting told “It’s a screwdriver… go build a cabinet or something” by River way back in Series 6) and her assessment of herself as, “archaeologist, murderer, thief.” From this point on I kept snorting with laughter at River’s antics. Who didn’t laugh at the below?

Hydroflax: You tried to kill me.

River’s spray which created whole new outfits was also awesome and I can’t have been the only person cheering when River told a turncoat waiter, ‘I’m an archaeologist from the future… I dig you up.’

The Doctor’s Relationship with River

This episode also showed us more of the two’s unconventional relationship. Though much of the episode felt like fic filmed, I didn’t care because I was having such a good time watching anyway. I liked that River didn’t recognize The Doctor, as this gave us the chance to see what she does get up to without him. I love the room that the show (and Big Finish) leave for themselves with the reveal that River often steals The Doctor’s TARDIS (He’s never noticed before) and the reveal of a brandy stash that The Doctor didn’t even know existed.

River’s failure to recognize Twelve also allows for great sparring between Kingston and Capaldi and helps the episode to sparkle. I loved Capaldi’s delivery as he fakes surprise at the TARDIS being bigger on the inside (‘My entire understanding of physical space has been transformed’) and River’s quip ‘were you born boring or did you have to work hard at it?’ I was howling with laughter at the Hydroflax auction with Twelve’s frantic improvisation and River’s fake telephone signalling. I also snorted at The Doctor and River’s attempts to one-up each other on the other marriages front as their ship is about to catastrophically crash, with both eventually conceding a draw at Cleopatra. I also liked the below quip which says it all really:

The Doctor: I’ve been doing it longer.

River: I’ve been doing it better.

The conceit also allows us to see events from River’s perspective, and allows the episode to blend the silly with elements of adult darkness and sadness. The scene where River has a tear in her eye over The Doctor’s diary, over her understanding that he was the sort of person who would know when a diary would run out and The Doctor’s observation that ‘he sounds like an awful person’ is quite interesting. When River tries to stall for time with her speech that The Doctor ‘doesn’t go around falling in love with people,’ it reveals a lot about her character to that point. The below speech was impassioned and epic, but note that River always had an escape route, even if no Doctor would have entered the story.

River Song: When you love the Doctor, it’s like loving the stars themselves. You don’t expect a sunset to admire you back. And if I happen to find myself in danger, let me tell you, the Doctor is not stupid enough, or sentimental enough, and he is certainly not in love enough to find himself standing in it with me!

The Doctor’s soft ‘hello sweetie,’ in reply was beautiful in its simplicity and allows us to see how Silence in the Library River came to be.

The Husbands of River Song finally reveals to us how River ends up at the singing towers and the library. The final act of the episode is both bittersweet and a strangely adult ending to the fairy story that began in 2008. Though the restaurant outside the singing towers of Dollirium is essentially Doctor Who’s answer to The Restaurant at the End of the Universe (the comparison brought to mind further with River’s comment that ‘I had this book. History’s Finest Exploding Restaurants. The best food for free. Skip the coffee.’), it allows for a lovely final date for the couple and the line ‘our only available slot is Christmas Day…’ four years in the future. Lucky for The Doctor he has a time machine. It also gives The Doctor an excuse to give River the sonic she sports in her debut two parter.

River: Funny thing is, this means you’ve always known how I was going to die. All the time we’ve been together, you knew I was coming here. The last time I saw you, the real you — the future you, I mean — you turned up on my doorstep, with a new haircut and a suit. You took me to Darillium to see the singing towers. Oh, what a night that was! The towers sang and you cried. You wouldn’t tell me why, but I suppose you knew it was time. My time. Time to come to the Library.

I also liked that Moffat connects the story back to River’s debut in dialogue as well as plot. Moffat loves to mirror and this year’s Christmas special was no exception. Take the below for example:

The Doctor: Are you crying?

River: No. It’s just the wind.

The Doctor: When the wind stands fair and the night is perfect. When you least expect it, but always when you need it the most – there is a song.

River: You’ll wait until I’ve given up hope. All will be lost, and you’ll do that smug little smile and then you’ll save the day. You always do.

River: Everybody knows that everybody dies, but not every day. Some days are special. Some days are so, so blessed. Some days, nobody dies at all. Now and then, every once in a very long while, every day in a million days, when the wind stands fair and the Doctor comes to call, everybody lives.

The final part of the episode is pure fairy tale, but it’s both beautiful and suitably Christmas spirit, perhaps the most any any Christmas special has been since The Christmas Carol.

The Doctor: Times end, River, because they have to. Because there’s no such thing as happy ever after. It’s just a lie we tell ourselves because the truth is so hard.

River Song: No, Doctor, you’re wrong. Happy ever after doesn’t mean forever. It just means time. A little time. But that’s not the sort of thing you could ever understand, is it?

It’s a beautifully sad moment, but luckily, both the audience and River are proven wrong when The Doctor reveals that a night on Dollirium lasts 24 years. Such is the power of the River/Doctor relationship that by the time the episode fades out with:

‘And they lived happily ever after,’ trailing away to simply, ‘happily,’ it feels like Moffat and the episode itself have earnt the indulgence.

The WordPress.com stats helper monkeys prepared a 2015 annual report for this blog. Here’s an excerpt: A New York City subway train holds 1,200 people. This blog was viewed about 6,300 times in 2015. If it were a NYC subway train, it would take about…