Doctor Who Re-Watch: Army of Ghosts

Well, what can I say? As an angst riddled teen I loved this finale. Then I re-watched in my uni years and found the whole thing irritating melodrama. Then, um, Ben and I re-watched and well, I kind of like, enjoyed this first part of…

One of the important things about being a writer, is not just churning out the words, re-writes and edits in your dark writer’s cave, but also connecting with other writers and story-tellers to connect with your people, your community. Local writers festivals are a great…

Doctor Who Re-watch: Fear Her

This is weird. My memory told me Love and Monsters and this episode were the two worst Doctor Who episodes of the RTD era. My memory has lied in a happy accident. Or maybe it’s just I really am not feeling the Thirteenth Doc so the re-watches seem better than they are? I dunno. Either way, this was bad, but not as bad as I remembered.

Ben: This episode started with a feeling of disquiet between the warnings of the old lady, Maeve, and Chloe singing Kookaburra Sits in the Old Gum Tree. Then a kid named Dale gets trapped in a drawing! I wonder how Maeve knew it was about to happen? Plus, it’s pretty clear that Trish knows what’s going on from the beginning and doesn’t know what to do. #mysterious

Maureen: I was too busy being all,’hey didn’t this come out in 2006 and like wasn’t the Olympics in 2012? Was the UK forward planning that much? Damn!’ and ‘what have I seen the actress playing Trish in before’ and ‘why an aussie song? How very specific.’ Ahem. I promise I can be a TV critic! Anyway, I thought the opening had a great sense of horror atmosphere until the cheesy drawing of the kid wearing the Union Jack shirt. 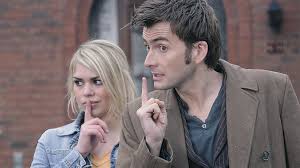 Ben: Maybe it’s because I’ve been watching the current season of Doctor Who and the Thirteenth Doctor and her three companions just don’t have any chemistry to speak of, but I could practically feel the crackling in the air between Rose and the Doctor.

Maureen: OMG BEN I AM SO HAPPY YOU THINK THIS BECAUSE I WAS BEGINNING TO THINK I WAS GOING MAD. But enough current show slamming. I am not the biggest fan of Ten/Rose, but there’s no denying that they’re always better sans Mickey and other quasi companions. If Mickey had never existed on this show, I would have dug these two a lot more. You can just tell that in the scenes where it’s all on Billie and David, they are having a right laugh and it bleeds into every scene. I loved them laughing over hot banana and I even shipped them at the end when they held hands and I never ship these two.

Ben: Plus, her hair and makeup was nice.

Maureen: Superficial. But I cannot deny it. I wrote that in my notebook too. Also, yellow does not Billie Piper suit when the fake tan she embraces.

Ben: I also (to be a broken record) really loved how much Rose got to do this episode. She was the first one to suspect Chloe, not the Doctor. And she was the one who investigated Chloe’s room, and the one who figured out where the Isolus’ ship was! Not only that, but she’s instrumental in restoring the ship to a working order, and guided Chloe and her mum through the attack by nightmare dad. You go Rose! Her and the Doctor have become a great team in the time they’ve been together, but that doesn’t mean she can’t do her own thing if she has to!

Maureen: Yeah, which is why I’ve never understood the show’s obsession with having Rose spout lines about being nothing without The Doctor (but more on that in next week’s episode). Also, nice callback to The Idiot’s Lantern as The Doctor runs off as Rose is mid-sentence … again. My favourite Rose moment was actually the scene in Chloe’s room when she’s all, I’m not gonna open it (the box), I’m not gonna open it, and does only to get attacked by a scribble.

Ben: Ahh yes! It’s been awhile since we’ve had a ‘the Doctor can’t drive the TARDIS’ gag.

Maureen: I’m loving these trope names. You missed the whole lonely God trope though, which is surprising, BECAUSE THIS IS ALL OF TEN’S SHTICK.

Ben: The gag with the cat and the back combing was worth a chortle or two. Then we get to the heavy stuff, as the Doctor deduces Chloe is using ionic energy to trap people in her drawings. It’s just a shame that the parallels between the Doctor and the Isolus never really were explored, but they’re both lonely travellers who’ve been travelling the universe for years upon years.

Maureen: Wait. What? I thought they were about as subtle as a sledgehammer. But then, I have like bells going off in my head or something every time there’s even a hint of Ten’s lonely God. I present to you the key last of my kind moment:

Rose: You knew the Isolus was lonely before it told you. How?
Doctor: I know what it is to be alone.

But also, I found this throw away line intriguing.

Rose: Kids can’t have it all their own way.
Ten: They deserve understanding … I had a son once.

From such dialogue whole new series arcs are born. I was way less keen on everything that happened from The TARDIS vanishing. So Rose whispers ‘the magic of love’ to Chloe and somehow that makes the alien leave Chloe, except the leftover alien energy manifests as Chloe’s violent and abusive Dad? What now? Also The Doctor running with the Olympic flame and the onscreen reporter saying he’s a symbol of love and hope can fuck right on off. Leave the love stuff to Moffat. And even then not always.

The Alien of the Week

Ben: The episode’s premise was really interesting to begin with – children vanishing, energy being drained from the street, and the strange smell of ionised air left behind wherever someone vanished. Then we see the kids living in Chloe’s drawings, and the nightmare dad coming to life in her closet. It’s a shame Chloe’s actress was a bit out of her depth as the Isolus and it’s motivations were really quite compelling, plus they set up the parallels between it and Chloe – two lonely kids just managing the best they can in a bad situation. It made a lot of sense that the Isolus is a child, it makes emotional and illogical decisions and can’t be reasoned with. It’s also a shame that the resolution of this episode was rather ridiculous, with the Olympic torch and the power of love reawakening the Isolus’ ship. And then we get the ridiculous spectre of nightmare dad, which really didn’t make sense to me.

Maureen: What Ben said. I also felt like the abusive dad side story and Mum not talking about him could have made for deeper exploration. I wondered at the end with the rushed sugar sweet denouement if this shouldn’t have been a two-parter.

Ben: Having an episode set in 2012 being in the not too distant future definitely made me feel old. And in a lot of ways this episode reminded me of The Idiot’s Lantern episode, a good/interesting premise let down by a shocker of an ending. The shoehorning in of the Olympics was a bit awkward too, similar to the Queen’s coronation. Additionally, Chloe’s mum Trish was really the highlight of this episode. She’s an excellent actress portraying a complicated woman. A woman who’s scared of her child, but at the same time trying to protect her. Which unfortunately only helped to highlight how bad Chloe’s acting was. The casual racism at the start of the episode also felt really out of place with the accusation of the black council worker of being behind the vanishing kids, but I guess is now surprisingly realistic in today’s climate. All in all, it was an episode that started off well but then lost it’s way. I’m giving it a 5/10.

Maureen: I’m with Ben as usual. I think you’re right about The Idiot’s Lantern comparisons. With a second script edit and perhaps a second part, this could have been a lot stronger. Given the rushed and cheesy ending and some bad acting at times, I’m giving this 4/10 inky stars. I gave it one star less than Idiot’s Lantern because my attention wondered after the first twenty minutes in a way it didn’t with the latter.