Doctor Who The Doctor Falls Review

Well! That was Matt Smith’s The Time of the Doctor done right! That was the multi Master story I never knew I wanted! With the exception of the weird deux ex machina at story’s end, that was a near perfect Who finale! Heck! That was…

Doctor Who, Reviews
-
by Maureen
-
8 Comments

So I had to leave some processing time between initial watch and the rewatch of this episode and the finale to be able to review. Though I wouldn’t go as far as the Radio Times, who labelled World Enough and Time as the best episode…

Doctor Who Eaters of Light Review

Review disclaimer: A friend of mine commented on my low score for the previous Gatiss penned episode. By way of explanation, it’s pretty tough to rate Who episodes out of 10 from week to week anyway given the wide range of genres and scenarios the writers have the freedom to explore, but even when an episode is above average, it might not get get much above 6/10 from me because it’s fine in terms of plot, characters and story of the week, but it’s not memorable beyond that stand alone story. In other words the episode is adequate, yet not very memorable in terms of a wider series arc or when compared to the many, many episodes New Who has given us over the years. I am thinking of moving my score system to a number out of 5 just to make review score clearer for those reading

This week’s The Eaters of Light was penned by classic Who writer Rona Munro, she of Survival fame. I’m one of those people who really dug McCoy Doctor and especially his time with Ace and the often surreal, gothic and multi-layered stories that came about towards Seven and the show’s demise, so I was already pretty keen for this episode. I also love Celtic Britain and stories of that lost world of nature meeting the supernatural. 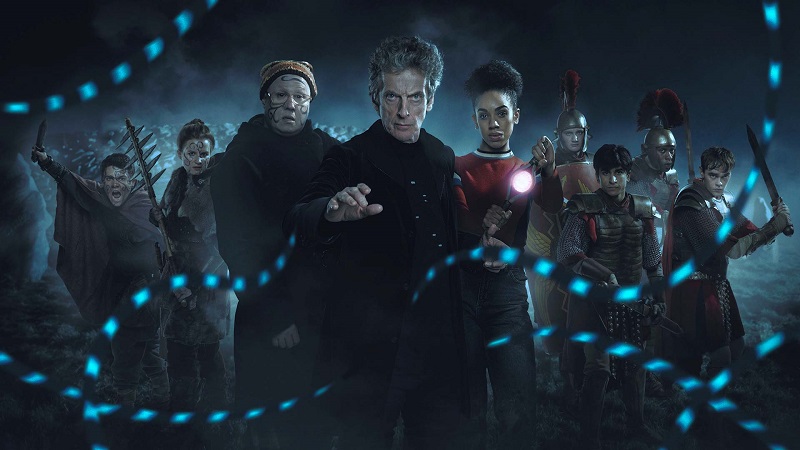 The Doctor, Bill and Nardole find themselves splitting up early in this episode to find the missing ninth legion. Of course, Bill finds them first. Meanwhile, The Doctor and Nardole discover a Pict tribe with a portal to a bizarre parallel world where a kind of light eating alien colony resides (how Stranger Things!)To defend themselves from the invading army, the Pict leader, Kar, releases one eater of light into our world. The Doctor is horrified and the episode essentially retreads the same ground as the previous week’s The Empress of Mars in forcing two opposing sides to find middle ground for the middle ground. I believe it probably just comes down to personal preference to decide which episode you prefer, though I do agree with other review sites who point out how similar the two episodes themes are to choose to play them back to back in the series run.

One of the most fun aspects of Bill is that she’s just an ordinary university student with a chip making job on the side and so for her the universe is so full of wonder and discovery. I loved Bill’s slow realisation that the TARDIS was helping her and the centurion she finds to understand each other. I also loved the discussion of fluid sexuality between her and the centurions and that, surprisingly, the Romans are unfazed by her sexuality.

Finally, at episode’s end she serves as The Doctor’s hubris reminder (God I love that Moffat companions do this) when she tells him, no, no he cannot simply enter the portal as a protector for all eternity and assume he is the only person capable of sacrifice. The Doctor’s companions should do many things in my opinion to be deemed successful. They must find the universe wonderful, a place of discovery, to remind the Doctor just how wondrous his lot in life is. They must help The Doctor to remain kind. And they must remind The Doctor not to presume he must solve everything, to be the solution to every problem, to consider himself as the most important person in the room. I think Bill does all of these things for Twelve and this is one of the reasons she is so good as the current main companion.

Matt Lucas has definitely grown on me as time has gone on. His performance has grown subtler with each episode of series 10. Still, I am not sure that he is actually needed here or elsewhere this series. He provides light comic relief and is an interesting mixture of cowardice and strength, but I am not convinced he plays any important role in any of these stories (and certainly not when compared to the role companions like Rory played in overall main companion arcs). I did enjoy him in a dressing gown Arthur Dent style (Who has an obsession with HHGTTG references) and the difference between him and The Doctor when it comes to meeting new people. Nardole tries to assimilate, to befriend, to be a part of the community. The Doctor feels he needs to hold himself aloof, so he can better assess the problem he faces and to prevent himself from growing too attached. There must be a way to reduce the hurt he feels when he fails to save people.

I don’t feel that this series has had all that much to say about The Doctor when compared to other series with Capaldi. Eight had a strong theme about what makes a good man whilst series nine had stories about The Doctor’s aloneness and his way of dealing with companion grief. When Missy isn’t present in the story, I’ve felt that this series is more interested in Bill and Nardole and what travelling with The Doctor says about them, rather than what The Doctor’s approach to the problem of the week says about him. This isn’t a bad thing by the way. It’s just an observation.

I didn’t like Twelve much this episode. He is a bit of a dick when he criticises Kar’s decision to release an eater of light into the forest to stop the Roman invasion.

The Doctor: So, you thought the Eater of Light could destroy a whole Roman army.
Kar: It did!
The Doctor: And a whole Roman army could weaken or kill the beast.
Kar: Yes.
The Doctor: Well, it didn’t work! You got a whole Roman legion slaughtered, and you made the deadliest creature on this planet very, very cross indeed. To protect a muddy little hillside, you doomed your whole world.

Kar couldn’t have known this. She and her tribe were frightened and desperate. Their world hangs on a knife edge. Why shouldn’t they use any weapon at their disposal? I understand that it is the fear of the Romans and the Scots which prevents them from finding a way forward in peace and that this is one of the points the episode is making, but I still was annoyed with The Doctor in this moment and quite pleased that Bill brings him down a notch or two five minutes later.

The Allegory of the Raven

I knew that the writer of Survival would go in for allegory, and with an episode set in Celtic times, it makes sense. Allegory is so important in the stories told by the Celts to connect to their world. The physical landscape and its creatures are symbols of gods and goddesses, gateways and keys to the supernatural, part of important magical rites.

It was therefore a nice touch to have the ‘caw caw’ of the crows as a throw back to Kar. Kar lives on in the calling of the crows. And they know her name because once upon a time, humanity could speak with animals. The mythic was reality.

Quote of the Episode

Ironically, not from the story of the week but from the Missy epilogue.

The Doctor: That’s the trouble with hope. It’s hard to resist.

The Eaters of Light: 7/10 inky stars (for a story that was well done but a little too similar to last week’s and with an oddly tacked on coda with Missy which felt a bit out of place)