On the 24th of April, I attended a Panel on Writing at the University of Wollongong. I got permission afterwards to blog what was discussed for the benefit of my readers. Hopefully everyone gets something out of this! The panel was led by Prof. Ivor…

Isobelle Carmody’s The Sending is Book Six (Australian version) in her popular Obernewtyn Chronicles, Book One now itself a Penguin Classic. This review is therefore not pitched at new readers, but rather at those who are already invested in the series; people who are no doubt…

Before I say anything more, I should point out that I haven’t read the books by Suzanne Collins. I now wish I had and I will now add them to the ever growing book queue. The movie wasn’t perfect, but it sold me the story, and maybe that’s all that matters.

I wasn’t sure what to expect from this movie. Comparisons to the Twilight franchise weren’t selling me anything, and the rise of teen franchises isn’t exactly thrilling to me either. Most movies that fall into the speculative fiction genre these days bug me because they throw so much energy into CGI spectacle, and don’t spend enough time on actual storytelling- on things like characterisation and sense of thematic purpose. If a movie does manage this I’m usually (and this is a sad indictment) pretty happy with it. And then rarely, every once in awhile, I see a genre movie that has actual emotional resonance. The Hunger Games achieved all of these things for me.

Set in a dystopian future, the Capitol rules over its people, not with a literal iron fist, but with something perhaps even more powerful, Machiavellian politics. After rebellion, the poorer districts must show that they submit to the power of the Capitol by giving up two of their children every year to participate in the Hunger Games. These children, aged between 12 and 18, must fight to the death, for the glory of their district, and more importantly, and very ironically something that the film does a poor job of explaining, to win food for their district for that year.To save her sister from participating, after her name is drawn out of a lottery , Katniss Everdeen volunteers to represent District 12. Can she survive the games alive? And more importantly, if she does survive, can she live with what she has seen and done? 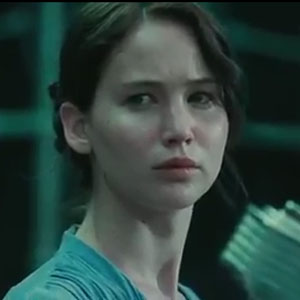 I really liked this movie alot. Jennifer Lawrence, who plays Katniss, has a good deal of screen presence, and I was pleased to see that the script used its actors properly, to show rather than tell, what characters were thinking and feeling by allowing quiet scenes and letting the eyes do the talking. The script gave time for the audience to process the enormity of what Katniss and her fellow competitors were being put through. I felt what it was Katniss was losing- innocence.

That loss of innocence was made more visceral by the brutal on screen deaths of those in the Game. One scene depicted a child being hacked to death by another child, and all on national television. I was horrified. My friend, who watches all mannor of horror movies, covered her eyes in parts of this movie. For once this is a movie adaptation that doesn’t shy away from its own themes (ala The Golden Compass), and uses cinematic image to ram its theme home. The ending was suitably anti-climatic, in time for part two, presumably released sometime next year, and yet somehow also appropriate. How does one go on, after all, knowing they’ve been watched on tv, every weakness and strength exposed, as they murdered other children in cold blood? A very disturbing thought indeed, and one that clamoured around my brain long after the film had ended.

So, yes, the Hunger Games of the title could have been explained, and the logistics of the political institutions that control the districts made clearer, with the ending less abrupt, but this is the first time in an age I’ve actually cared about the movie I’ve just seen.

The Hunger Games packed an emotional and visceral punch. Thank God for that.

Fantasy- what exactly are we talking about?

It has occurred to me that we haven’t gone all meta on fantasy at this blog yet, which is odd, seeings as this entire blog is premised on the role of fantasy, as a branch of speculative fiction, in human society. I did a quick google of…